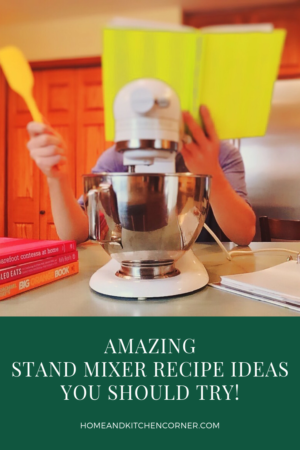 Quick question: how much do you actually use your standmixer?

As with many other people, your stand mixer is probably one of the most underutilized kitchen equipment you own.

After getting a new stand mixer, the novelty of it wears off after a few months, weeks, or even just days, and you’re not sure what else you can use it to make.

That’s this post has come to your rescue (or your stand mixer’s rescue, as the case may be).

What you may not have realized is that it is also one of the most powerful and versatile pieces of equipment in the average kitchen.

There are literally dozens upon dozens of recipes that you could put together with a stand mixer, and you don’t have to limit yourself to sweet desserts and baked goods either.

In fact, it is safe to say that stand mixers can be used for pretty much everything from creamy mashed potatoes to savory entrees to ice cream, and most everything in between.

“What can I make with my stand mixer”, you ask? Read on to find out!

What Can I Make with a Stand Mixer?

If you already have a stand mixer in your kitchen, the range of foods you can prepare is only limited by your imagination. Most people tend to use their stand mixers for mixing dough, and as with a food processor, and it truly excels at that task. With a good stand mixer, you can achieve a smooth and even consistency much more quickly, and with much less effort than if you did the mixing by hand.

Now we’ve include a recipe for focaccia that you can try out with your stand mixer, and the results will doubtlessly be pretty amazing. But we’ve also included other recipes ranging from the fairly basic mash potatoes to an out-of-this-world mint-chocolate meringue. We’ve even thrown in a recipe for unbelievably smooth and creamy ice cream just to emphasize how many delicious foods you could make.

So if that fancy stand mixer has been gathering dust in your cupboard, now is the time to get it out of the mothballs and give it a good workout! We guarantee that you will be impressed with the results!

Focaccia is such a highly-regarded bread recipe that most people think it is difficult to make. But it is actually quite simple, and using a stand mixer makes it even easier. In fact, you might even find yourself with a rich and chewy batch of flavorful goodness right on your first try!

Place the following ingredients in the bowl of your stand mixer: water, yeast, two teaspoons of rosemary, sugar, and half the flour.

Mix with a spoon until well combined, then mix with the dough hook attachment on low speed.

Add in the rest of the flour, salt, and half a cup of olive oil and keep mixing.

When the mixture has formed into dough, turn the speed up to medium. Keep mixing until the dough becomes soft and smooth. You may add a tablespoon of flour at a time if the dough is too sticky. Don’t add more than two tablespoons!

Place the dough in a bowl that you have previously oiled lightly. Turn the dough over to pick up a coating of oil then cover it with plastic wrap. Set the bowl aside to let the dough rise for an hour or until it has doubled in volume.

Oil a jelly roll pan with the rest of the olive oil. Put the dough in the pan and press it out until it is flush with the interior. You can actually stretch out the dough so that it tears slightly in places.

Cover the dough with plastic wrap and set it aside to double in size again.

Take off the plastic wrap and brush the focaccia lightly with olive oil. Sprinkle the coarse salt and the rest of the rosemary on top.

Place the pan in the oven and bake for about half an hour until the crust is golden brown.

Remove the pan from the oven and let the focaccia cool before serving.

You may not have realized it yet, but you actually have the makings of a very efficient pasta factory in your stand mixer. With the addition of a pasta maker attachment, you could be making pasta like a pro. It’s so easy to make that you might never want to eat store-bought pasta ever again!

Place the flour into the bowl of your stand mixer. Attach the flat beater attachment and turn the speed to low medium.

Add the eggs in gradually, along with the water and salt. Mix for about half a minute.

Replace the flat beater with the dough hook attachment. Knead for about two minutes on low medium speed. If the dough seems a bit crumbly, add a teaspoon of water at a time until it firms up.

Transfer the dough to a bread board lightly dusted with flour. Knead the dough by hand and form into small balls.

Attach your pasta maker attachment and press the dough balls out into pasta strips. 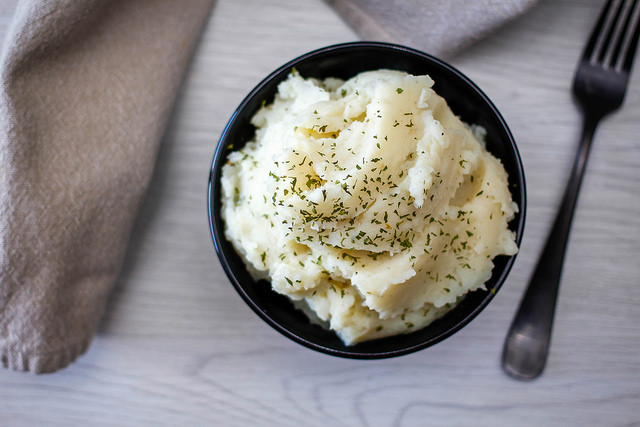 Everyone loves mashed potatoes, but not everyone wants to go through the hassle of making them. The task is definitely a lot easier if you have a stand mixer handy, so don’t be surprised if it becomes a regular part of your dinner menu from now on!

Boil enough water to cover the potatoes in a large pot. Add one teaspoon of salt.

Prepare the potatoes by peeling and washing them thoroughly. Cut them into 2-inch cubes.

Place the potatoes in the boiling water and cook for about half an hour. You’ll know they’re done when a fork can pierce through them easily.

Drain the potatoes set aside to let the steam evaporate.

Add the butter to the potatoes along with the cream cheese, heavy cream, salt, and pepper. Whip the ingredients up to a creamy mixture with your stand mixer. For extra creaminess, you may add a bit more heavy cream.

For something so light, fluffy, and delicate, meringues actually require a lot of hard work to make. You really do need a lot of time, patience, and elbow grease to whip up a batch of meringue, and many people are simply not up to the challenge. Thankfully, it is a lot more manageable with a stand mixer, with which you could easily put together this delightful mint and chocolate treat!

Place a rack in the highest slot in your oven and preheat to 250° F.

Take a good sized baking sheet and line it with parchment paper.

Place the egg whites in the bowl of your stand mixer and beat at medium speed.

When the egg whites have become foamy, add the salt and cream of tartar. Turn up the mixer to medium high and continue whipping until it forms peaks. At this point, the eggs should be foamy, with large bubbles.

Add the granulated sugar and turn the mixer up to highest setting. Continue whipping on the high setting until the egg whites form stiff peaks. At this point, the mixture should be easy to spoon, but still hold their shape when portioned out.

Add the peppermint extract and the chocolate pieces.

For every meringue, place two tablespoons of the mixture on the baking sheet. Set them about an inch away from each other.

Place the baking sheet in the oven and bake for an hour or so. Take the sheet out when the meringues have browned slightly.

Set the meringues aside to cool before serving.

Who would have thought that strawberry ice cream of the finest quality can be made at home? With a good stand mixer you can! This recipe will enable you to whip up a batch of homemade strawberry ice cream that is every bit as creamy and delicious as any you could buy in a store.

½ cup half and half

Whip the mixture in your stand mixer until the strawberries have been puréed. If you want your ice cream to come out really smooth, simply whip the mixture for a few mints more.

Add the heavy cream, half and half, and vanilla extract. Turn the mixer on again and make sure that all the ingredients are combined well.

Pour the mix into an ice cream maker, and follow the instructions for making ice cream.

You can serve the ice cream immediately if you wish, or you could freeze it for a few hours for thicker consistency.

We’ve only just touched on some of the possibilities that lie in wait with your stand mixer. If you have just been using it for baking, you probably realize now that there is a whole world of delectable and savory treats out there.

The good news is that even the most complex recipes can be made a lot easier by relying on your stand mixer to do the bulk of the heavy lifting…er…mixing. As with most recipes, remember that experimentation is the key. As you gain more confidence, there is no telling what delicious entrees and desserts you can come up with!