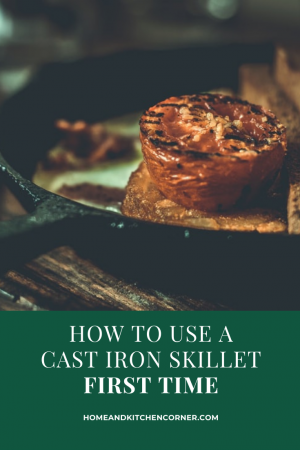 Although many manufacturers already pre-season cast iron cookware, generally, it’s a great idea to season it at home instead of simply washing it with warm water. So, you should take your cast iron skillet and give it some scrubbing with steel wool, hot water, and dish soap to get to the base layer.

Not only should you clean the surface, but the bottom, handle, and sides of the skillet.

After you’re finished with the scrubbing, rinse the skillet under hot water and continue scrubbing with the tough side of the sponge or scouring pad. Rinse it again afterwards.

Dry the skillet with a piece of paper towel or regular kitchen towel. After that, place a cast iron skillet on the electric burner to dry completely as this prevents any unwanted rusting.

Choose an oil with a neutral taste and relatively high smoke point. Pour a small amount of the oil right into the skillet or on the piece of paper towel and rub it into the skillet, covering all parts, including handle, bottom, and sides.

Take another piece of paper towel or kitchen towel and wipe off any excess oil. If you leave too much oil on the surface during seasoning, it will become sticky.

Preheat the oven to 400-440°F, or at the highest temperature that the oil of your choosing can go. Place the skillet upside down in the oven and a tray or parchment paper that will catch all the drippings. The whole process will take you about an hour.

After the time is up, turn the oven off and let the skillet cool down. As a result of this, you get a shiny, hard non-stick layer.

Cooking with a cast iron skillet for the first time

When you are cooking with a new cast iron skillet for the first time and several times after that, pour a bit more oil than needed. That way, each time you cook, you will add another layer of seasoning on top of an existing one. Don’t forget to use oil with a neutral taste and a relatively high smoking point.

It’s a well-known fact that cast iron cookware poorly conducts heat. In other words, you need to wait for some time till your skillet gets hot, but then it distributes heat evenly and has a long cooling down time. There’s no need to cook on high heat as it is harmful not only to the non-stick surface on your skillet but to the food you’re cooking as well.

You can cook an omelet on medium-low heat, bacon strips, beans and onions on medium heat, burgers, and thick-cut steak on medium-high heat.

Although an electric stove has a knob with temperature control, you still might miss the exact moment when the cooking oil in your skillet is hot enough to add some food. If the oil smells weird and emits blue smoke, it’s a sign that the oil is heated past the smoking point. In no case should you cook with this oil.

The best thing to do is to turn off the stove, take the skillet from the heat and let the oil and skillet cool down completely. Then you need to discard the burnt oil and clean the black residue off.

Naturally, when the cooking oil starts to shimmer, it’s the best time to add your food and start cooking it. There’s almost no limit to what you can cook in a cast-iron skillet for the first time, but you need to keep in mind several things such as avoiding cooking fish, acidic ingredients, and frozen food.

It’s better to avoid cooking fish in the first usage of a cast-iron skillet because the skillet has a porous surface and can easily catch the smell and taste of fish. Later on, everything else that you cook will have a fish aftertaste.

You also need to be careful while cooking acidic ingredients such as lemons, tomatoes, vinegar, lime, wine, and sauces that have all these components because if they simmer for more than 30 minutes, they might have a metallic flavor. You shouldn’t let acidic dishes stay too long in the skillet, it’s better to transfer them right away in an airtight container.

Generally, it’s a good idea to bring any frozen foods down to room temperature before cooking them. You should take out the frozen food 15 minutes before you start cooking. Otherwise, cold foods will stick to the skillet.

In the majority of cases, all cleaning that you need is to rub your cast iron skillet with a paper towel with a drop of oil, and all dirt that is left after cooking will come off. Sometimes it’s not enough and you need to give your skillet a good scrub with a nylon brush and hot water. But if you have some black residue from the burnt oil or from burnt food, you need to use one of the methods below.

Baking soda or salt with soap

First, you need to pour some baking soda or salt into the skillet. Then, add some dish soap, warm water, and start scrubbing. As baking soda or salt has the abrasive ability, it removes the carbon residue while dish soap removes the oil. After you’re done with scrubbing, rinse the pan with warm water and dry with a paper towel. Don’t forget to dry the pan completely by placing it on the electric burner.

First, you need to fill your sink halfway with water and add white vinegar and place your skillet there. After one hour is up, take the skillet out and start scrubbing. You should soak it again if some of the residue is still on the pan. Rinse the skillet with hot water, dry with a paper towel, and put it on the electric burner to remove the moisture completely.

This method is for removing burnt food rather than burnt oil.

We hope that now you know how to use a cast iron skillet the first time. It’s better to reseason your cast iron skillet at home with the oil of choice that has a high smoking point. There’s absolutely no need to cook anything on high heat, medium heat will do just fine. If the food got stuck and burnt or oil got burnt as well, you can undo it almost effortlessly. Don’t forget to always completely dry your skillet and then it’ll be a staple utensil for many generations.