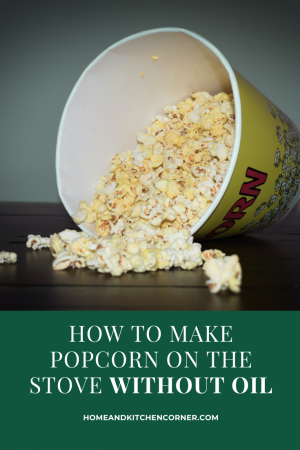 You have everything ready, the TV is turned on, the movie is ready to play, and the only thing missing is a bowl of freshly made popcorn!

You are heading to the kitchen to make a fresh batch, and you are stuck because you don’t have any oil.

At first glance, the evening seems to be spoiled if you don’t know how to make popcorn on the stove without oil, but it’s possible and it is easy to do. So in this article, we will tell you what you need to know about cooking popcorn without any oil.

Despite common opinion, you can make delicious and puffy popcorn without oil. The only thing you need here is to choose the right method for making kernels pop. Although you might find the taste of popcorn made without oil a little bit strange at the first try, with time, we think, you would find it rather tasty, especially when you can add any seasoning you like or at least add some salt.

For making popcorn without oil, you need a stovetop popcorn maker that is non-stick, has a tight-fitting lid with vents, and a steering mechanism. The steering mechanism helps you with not letting flakes be stuck to the bottom.

You should take the stovetop popcorn maker and place there kernels so that they cover the bottom of it in a single layer. Pour some water over the kernels till they’re covered, then put the popcorn maker on the burner and turn on to medium heat. In some time, you’re going to hear popping.

After you hear more than just a few kernels, you should reduce the heat to the lowest point and steer the kernels every 10-20 seconds. When there will be long pauses between popping, you should remove the popper from the burner and not uncover the popcorn until popping is fully done.

Interestingly enough, nutritionists say that eating popcorn is a great choice if you are looking to include more whole grains in your diet. One serving of popcorn has the 70% of whole grains that are recommended to consume daily. The good news is that popcorn is rich in fiber and has a low glycemic index. In other words, eating popcorn doesn’t affect blood sugar levels the same as eating other carbohydrate snacks would. Popcorn is great for managing the amount of food you are consuming, as a serving of popcorn reduces the hunger feeling significantly.

Popcorn has been a common snack for many years. It is said that the first appearance of popcorn is dated back to 4700 BC, Mexico. During the 19th century, popcorn was popped with the help of a stovetop. Popcorn gained its popularity in the 1980’s when the first popcorn maker was invented. During the Great Depression, popcorn was at its cheapest and cost only 5-10 cents for a bag. Thanks to that, many farming households thrived and had steady income.

The question that leaves everyone puzzled is, what makes each kernel pop?

Why Popcorn Pops – The science behind popcorn

Popcorn kernels contain oil, water, and starch that are packed in a strong and hard coating.

When you are heating popcorn kernels, the water inside the kernel tries to evaporate. So to say, the molecules of water start to vibrate. The longer you’re heating the kernels, the faster those molecules are vibrating. This vibration creates a lot of pressure inside the kernels. When the pressure reaches the peak or the temperature of 356°F, the shells can no longer contain the energy, and the shells crack, making the popcorn pop.

The pressure drops very suddenly, and it makes starches and proteins that are stored in popcorn change their shape into foam. When the foam is cooled, it forms the puff that we all know and want to eat immediately. That puff, a popped piece of popcorn, is about 20 to 50 times larger than the dry kernel.

Which popcorn you get in the result depends on the speed at which kernels are heated. You get partially popped kernels with hard centers if kernels are heated too quickly. In particular, the shell of the kernel can rupture faster than the starch in the center can gelatinize. You get unpopped kernels if they are heated too slowly. The tip of the kernel can release the steam, which decreases the pressure that is needed for popping.

If you want to make puffy popcorn, you should always aim for fresh kernels because they contain more water molecules. Generally, reaching the moisture level of 14-15% results in big and nice puffs. Air makes everything dry a bit more through time. That is why popcorn that was exposed to air will be less likely to pop in big pieces.

Both consumers and producers of popcorn have two factors in evaluating the quality of popcorn, such as the percentage of popped kernels and how much each of them expand. We, consumers, tend to value and like those kernels that are tender and fully popped. Producers tend to value expanded kernels the most as it correlates with their profit.

There are different types of popcorn based on the shape of popped corn or the color and shape of kernels. Surprisingly, the popped corn is always either white or yellow, while the kernels’ colors can vary. There’re two main shapes of kernels, “rice” and “pearl”. “Rice” kernels are long on both ends, while “pearl” kernels are rounded at the top. Previously, pearl kernels were more popular than rice ones, but these days you can find both shapes in a variety of colors. Yellow and white colors continue ruling the commercial production.

Often, when popcorn is discussed, you can hear the word flake in relation to the popped kernel. There are two types of flakes that are important, such as butterfly and mushroom.

Butterfly flakes don’t really look like butterflies, but they have some sort of irregular-sized “wings”. Butterfly flakes are considered to be more tender and can “melt” in your mouth. Mushroom flakes are mostly ball-shaped or in the shape of jellyfish as they tend to have small “wings”. They are less fragile than butterfly ones, puffier, and are used for making caramelized popcorn. You can find certain types of popcorn that can be 100% butterfly or mushroom, but mostly you get butterflies and mushrooms in the same batch in different proportions.

We hope that you now have an understanding of how to make popcorn on the stove without oil, and that it isn’t an impossible task after all. There are a few important things to remember, such as using a stovetop popcorn maker as it ensures you have the best flakes possible. You should always choose fresh kernels with 14-15% of moisture level as you get big and nice puffs. You should monitor the heating speed and not remove the popper from the burner too early or too late. If you pursue only perfectly and equally shaped flakes, you should choose those kernels that are labeled with having 100% butterfly or 100% mushroom popping shape.