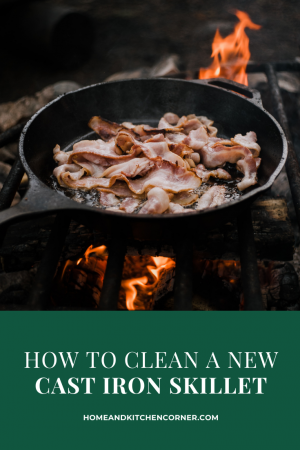 Cooking with cast iron is making a great comeback!

Cast iron cookware has a long history, and can even be considered old-fashioned, but it’s gaining in popularity.

In response, manufacturers are producing cast iron cookware more and more, giving you increasing choices to look at.

If you’re the brand new owner of a new cast iron skillet, you might be at a loss with how to care for your new cooking gear.

You might’ve heard that there’s a particular way of caring for it.

Not to worry, we got your back. In this article, among other things, we will help and explain to you how to clean a new cast iron skillet.

It is always good to know a thing or two about the history of cast iron cookware before jumping right in taking care of your skillet.

People were using cast iron for cooking for a long time in Asian countries. Only in the year 679 in England, the first mention of a cast-iron kettle appeared, and only in 1180, the term pot appeared, and it was described as a vessel that was able to withstand the direct heat from the fire. People valued cast iron pots and cauldrons for their durability and ability to retain heat evenly.

In the USA and Europe, food was cooked in the hearth, therefore, cast iron cookware became the best possible option for cooking. To be suitable for this cooking method, cast iron cookware had to have a handle to be hung over the fire or legs to be put on the coals. A frying pan with a side handle and legs was invented later to stand over the campfire, coals, and ashes of the fireplace.

With the invention of cooking stoves, there were no need for cooking pans and pots with legs, and the first flat cast iron skillet emerged.

Until the 1960s, cast iron cookware was very popular amongst homemakers. The majority of American households had at least one cast-iron cooking pan.

After that, cast iron became less and less popular as Teflon-coated non-stick aluminum cookware appeared. The reduction of demand for cast-iron cookware nearly led to the closure of almost all manufacturers in the USA. Nowadays, cast iron cookware has its own niche of customers as chefs from famous cooking shows bring attention to a few forgotten traditional cooking methods. Not only that but the durability and reliability of cast iron cookware make it a worthy competitor to all other cookware.

The first step in making sure that your cast iron skillet will be a dutiful helper for many years is to clean it properly. The very first clean-up will be a bit different from a routine one because you need to use hot, soapy water. Normally, a brand-new skillet is already pre-seasoned, but it’s better to clean that off for any sensitivities and general safety measures.

You should place the skillet in the sink, add about 1/2 inch or more of hot water and soap. Grab a stainless-steel scrubber and scrub the pan really well for a minute or so. Then, rinse the pan clean with water and place it on an electric stove to dry it completely.

Seasoning your cast iron skillet makes it non-stick, easy to clean, and prevents rust. In other words, seasoning is a layer of baked-on oil that gives the surface non-stick properties and protects the iron. Baked oil makes cast iron cookware black through the process that is called polymerization. Polymerized oil is a renewable natural non-stick surface which means that you can season your skillet again and again, with each time the seasoning becomes better.

Pour a bit of avocado or soybean or flaxseed oil on a paper towel and rub the oil all over the pan with your hands. Place the skillet on the preheated electric stove burner and let it sit there till small smokes will come out from the bottom of the skillet. Do it up to 6 times in total to achieve a perfect sheen and hard to get off seasoning.

Alternatively, you can bake your cast iron skillet in an oven at 325°F for about an hour. Don’t forget to put a tray under the rack with cast iron in case of any dribblings. After one hour has passed, open the oven and let it sit there until it is completely cooled off.

There’re a few things to know about storing a cast-iron skillet properly. First, you should always wipe it dry before you stack it on the shelf or hang it. You definitely don’t want rust to spoil your seasoning. Second, you may consider slipping a single sheet of paper towel into the skillet for storage as it will absorb any moisture and protect the pan surface.

Not only is it important to clean a cast iron skillet right before usage, but knowing and maintaining the right cleaning routine will prolong the lifespan of cast iron.

In the majority of cases, if you have decent seasoning, you can clean your cast iron by wiping it down with a dry cotton dishcloth or paper towel. Bits of stuck-on and burnt food should easily come off. If any other bits remain, you can scrape them with a rubber, wood, or silicone spatula. If the pan is still dirty, you can use a scrubber and some water.

Place the skillet in the sink, add about 1/2 inch or more of warm water and sprinkle about half of the cup of coarse salt. Right away, scrub the pan with an ordinary kitchen sponge or a stainless-steel scrubber. Rinse the skillet with the water, then dry it over an electric burner. Then sprinkle, and with the help of a small piece of paper towel, rub the skillet with a bit of soybean or flaxseed, or avocado oil. If the skillet is too hot, use the tongs instead of your fingers.

Also, you can use the method of salt-scrubbing if you notice that there is some rust on the surface of the skillet. If the rust covers all surfaces of the cast iron skillet, then you need to fill the skillet with hot, soapy water and start scrubbing with a steel-wool or chain-mail scrubber. If for some reason that doesn’t work, you should spray the skillet with oven cleaner. Wait about 10 minutes, and then scrub the rust with a scrubber and soapy water. Afterward, clean with water, place it on the electric burner to dry, and rub it with oil.

We hope that you now understanding how to clean a new cast iron skillet. Summing up, taking proper care of your cast iron skillet is easy, and by doing so, you prolong its lifespan. You should clean your cast iron skillet with warm or hot water, stainless-steel scrubber soap, or salt, and then place it on the electric burner to dry. You should season your skillet properly with a sprinkle of avocado or soybean, or flaxseed oil and rub it well on the surface and let “bake” till the smooth and shiny gloss appears. Whether you want to store it on the shelf or hang it somewhere, you should always make sure that it’s dry.